Yes, we love Rahman, but should we love the film? 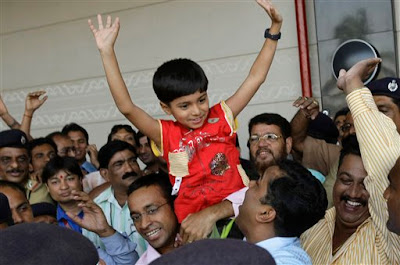 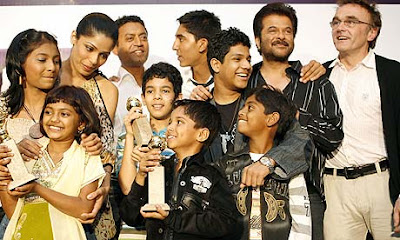 SLUMDOG MILLIONAIRE ..
Yes, it's in news these days. 8 oscars , 7 BAFTA awards, 4 Golden Globe.
Mass Euphoria in India when the movie won 7 BAFTA and the whole India was glued to the screen and went exuberant when we won 8 OSCARS.

But , do you think we should be proud of slumdog millionaire.

The movie only showcases the following points about India and Indians

We are celebrating Slumdog's success, we should be ashamed ourselves.
Instead of celebrating or also PROTESTING ( We are very good at it ), we should benchmark Slumdog to buckle up and improve the living standards of Indian slums.

Slumdog has no doubted helped India as well -
Indian film technicians have received tremendous exposure. Russell Pookutty was not known by anyone. Today he is a household name.
A R Rahman has received the well deserved acknowledgement of his brilliance
Talent of Indian actors have been showcased to the world

Does the US or the British rue on the fact that they dont win any awards in Filmfare 2009? In the same way why do we strive so much to win an OSCAR. After all, Oscars are American awards. They are not global awards.

We as Indians need to be proud of ourselves and our accomplishments and shouldn't look for Westerm world acknowledgements of our success
Posted by instant_blogger at 10:57 PM
Email ThisBlogThis!Share to TwitterShare to FacebookShare to Pinterest

I read your article about S.M and feel you are being shortsighted here.
Consider this - I am from Vancouver and know very little about India.
Now atleast now I know something abt d country. OK, the image is not well made .. but it gives a strong reason for ppl to visit India and like it.
Well.. I m visiting this easter and am very excited about Kerala

Thanks for reading my blog.
I appreciate your comments. It gives all a platform to share insights.

I agree that SM depicts a true happening in India. but my question is , does this depict the true picture of India?
DO you think India is all about crime, dishonesty and communal riots.
No country is perfect. Even Canada has instances of hate crimes but if a movie is made focusing on that, dont you think people will build an unfair image of Canada in that way.
There are hundred of thousands of Indians settled in Canada. Did you find Indians like to be the way they are depicted in SM ?

Think about it :-
Atleast you are getting millions of dollars of funding coming in to improve living standards in your slums.
If one child's life improves because of this movie, i think u shuld b satisfied

BTW, which r the best places to visit in india in april. i heard kerala is very very hot in that time. mayb will goto d himalayas

First of all, we should not be proud at ALL! We are stealing the glory from the American director. Indians have not done anything to be so proud! Yes, the actors were great, but why didn't the Indians come up with this idea? Where is the innovation from the Indian directors?

The idea was Indian. The movie is inspired by the book "Q&A" - rechristened " Slumdog Millionaire ". It was written by an Indian - Vikas Swarup.

But I agree with you completely on this. There is no reason for us to be proud.