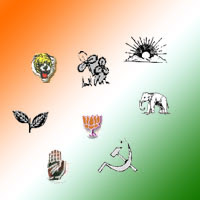 Everytime I think about Voting, this bright young guy's face comes to my mind who is offering chai to everyone. He is commanding everyone to wake up because they are not voting. Though this is a TV advertisment, it creates this feeling of disgust in all our minds who dont have thier voting cards ready
or those who have their voting cards ready but don't have the INCLINATION or TIME to go and vote.
Remember, you have complained about the Government , the public officials, the system for last 4 years. Now, its your time to go and change that.
And , NO ONE is STOPPING YOU

Goto www.jaagore.com and register to create your voting card

There were over 670 million people who are eligible to vote in 2004 Lok Sabha elections, 388 million of them voted. Thats a disgraceful 57% votes. and I am confident whoever is reading this blog belongs to the 43% of India who didn't vote.

This is not the end of it.
Of the 388 Million who voted, 297 million were not even primary level educated. Only
91 Million educated Indian voted in 2004 Lok Sabha elections. of which majority were primary or secondary educated.
DO YOU THINK THE FUTURE OF YOU AND YOUR COUNTRY SHOULD BE DECIDED BY THESE 297 MILLION? I am not trying to disrespect them, infact I am trying to glorify these 297M responsible citizens of India.
But you need to understand that when majority of them vote, they only consider their perspective. That might be electricity, fertilizers and irrigation. Its our responsibility to consider Foreign Policy, Economic Policy, Education Policy as a benchmark to chose our leaders.

COME ON GUYS, miss one movie and utlize that time to VOTE and create a difference
Posted by instant_blogger at 11:38 AM
Email ThisBlogThis!Share to TwitterShare to FacebookShare to Pinterest

INSTANT BLOGGER,
u seem to b angry about something and that is coming out on this blog.
Whatever it is ... I AGREE with u man
You Indians have the most hilarious voting system in the world.

Even we Indians do have hilarious voting system bt still some where down the line itz the best system in the world.....we r a democracy of 100 billion people thats a miracle
so guys come and vote for ur India