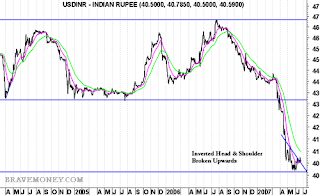 She was 4 in 1947, 16 in 1990, 31 in 1995, 50 in 2002 and is close to 40 in June, 2007.Yes, she became 40 after being 50.
In case you are still fantasizing about the age of some beautiful maiden, you got it all wrong. I m talking about the US Dollar vs the INR currency rates fluctuations and the deep impact it has over the economy and the people of India.
When Y2K arrived, it bought along prosperity for India. Indians were getting rich and famous, and the complete economic scenario of the Indian household was transformed. This resulted in more spending, bigger cars, better homes, overall an enhancement in lifestyles. This sudden cash surplus in homes resulted in the anticipated rise in inflation.
Let me tell you a bit about INFLATION: It’s referred to the hike in prices of common goods over the rise in purchasing power. It’s basically the scene where there is a large supply of money and there is a demand for goods, thus demand resulting in an increase in the prices. Where other countries were facing inflation rates of 1 and 2 %, India had to confront a staggering rate of 6-7 %. Commodity prices right from cereals, fuel, metals, chemicals, machinery to land and rents everything went sky rocketing. In a county like India, which has extreme rich/poor divide, even a marginal rise in any commodity prices causes havoc in a poor man’s budget. Hence a low inflation rate is a must for India .When finally the Government and the Reserve Bank of India realized this rise, the counter measures were initiated. RBI raised the interest rates and stopped supporting the Dollar further. This resulted in the INR rallying against the USD and in 3 months March to May, Dollar shed close to 10% of its weight i.e. from 44 to Rs 40 per Dollar.
A country to be a competitive exporter needs to have a supporting currency rate. This 10% drop in dollar rate had a significant negative impact on Indian export especially for industries like Textiles and manufacturing. Industries which strongly rely on exports are under attack to preserve their margins and if this continues they all would be bankrupt very soon. For example, an American company, say Wal-Mart buys towels worth 1 crore from an Indian manufacturer for $230 thousand , now they would need to pay $250 k for the same consignment, which they would not , so this loss has to be borne by the Indian Company. Even the companies which rely on domestic consumption are going through a crisis. Statistics say that in last 5 months, there has been a surge of 15% in imports in the country. But the worst hit is the Information Technology sector.
The IT companies both Indian and MNCs which primarily transact on USD, reported huge reduction in Revenues and profits and have switched to cost cuttings and insignificant pay hikes. It’s the employees of such companies who have been the worst affected. Costs cutting in companies have resulted in cutback on facilities and perks to employees. This is turn has caused dissatisfaction among employees and hence higher attrition rates.
Taking an emotional stance on this issue cannot be justified on the grounds that we forget that the very existence of our jobs is a byproduct of cost cutting measures taken in developed countries in USA, UK, Japan, Germany and Australia. I fully acknowledge the fact that technical jobs came to India in the form of cost cutting in the developed countries. So we have to be reasonable when questioning a company's actions. After all, cost cutting took away the jobs in the US and the Europe and brought them to us.
There are over 20 million NRIs all over the world. Their total worth is over 1 trillion dollars, and they send back 22 billion Dollars to India every year. Due to the depreciating dollar, there is a negative impact over this sum too.
Though there are many advantages of the rising Rupee too.
It has made it relatively easier for Indian companies to acquire companies abroad.
It has resulted in decline in prices of many products which India necessarily imports, for example Crude Oil, Gold, Diamonds, Computer parts, medicines to name a few. These reductions in prices have helped in decreasing the Inflation rates to some certain extent but there is whole lot more to do.
The Government policy of artificially raising the prices of Rupee has short term benefits but in the long term, it’s going to have a dampening affect on the Indian economy.
A country like India which is on a fast track towards progress, needs a Government which supports and aids in its path to glory and fame not one which does just the opposite.
Though we can’t just blame the government, the complete political system has to be blamed for it. After all, in a coalition government, everybody has to be kept happy.
India's GDP is increasing at an annual rate of 8%, this growth may cause issues like inflation and economy overheating, but we can counter these issues by having a balanced and rational policy instead of a makeshift and a hasty solution.
I can completely understand the problems of high inflation in India, but it’s just that being a true Indian, every small obstacle which tends to suppress the great India growth story gets me agitated. Let’s hope that this saga of unparallel success and development sustains in India for a long long time to come.
Posted by instant_blogger at 1:51 PM
Email ThisBlogThis!Share to TwitterShare to FacebookShare to Pinterest

you take away American jobs and are feeling bad about it