A tryst with a City

Nick hated Hong Kong the moment he set his foot in the arrival area of the Hong Kong International Airport. "There are people everywhere !!" he cried out loud. Coming from Perth, Australia where miles and miles would pass before you find another soul on the streets, the sheer volume of people and buzz was alien to Nick and it intimidated him. "This will work. This has to work" Nick reassured himself again and again. He had extensively researched “living in Hong Kong” but being in the city and in middle of all the commotion was very different and overwhelming.
Nick worked for an Australian architectural company as a landscape designer. With new projects mostly originating in Far East, the company needed stronger presence in the region. Someone had to move. Nick was the best and hence, the obvious choice and so there he was standing clueless in middle of a human jungle which people called Hong Kong. He purchased a ticket and boarded the Airport Express train to the city. Securing a seat, he gave a wide grin to the Chinese middle aged woman sitting opposite to him. She glared at him and then turned her face thwarting any further conversation opportunities. Nick was taken aback and swore to himself that he will mind his business from now on. The HK airport train takes a very scenic route passing the ocean and plenty of virgin green mountains. For a regular person, the ride would be filled with joy and awe but Nick, coming from the beach city of Perth, wasn’t much impressed. The train furiously raced on its tracks and reached the central district. He stepped outside and was trying to take the elevator up and someone broke into the line meanwhile stepped on Nick's toes. A sudden excruciating pain transmitted through Nick's system. By the time, he could give his piece of mind to the messenger of pain, he had long disappeared amidst the thousands of people." %#%$ !! Not a good first day at a new city" exclaimed Nick. Now, he entered the never ending queue for cabs. After waiting twenty minutes in the unforgiving June heat and humidity, Nick made it to his cab and now it was time to explain the cab driver where he wanted to go. Elgin Street shouted Nick ghastly. “Come on mate!! you need to know your city well”, pleaded Nick. The normally “a 10 minute cab ride” turned into a 45 minute one with the cabbie having no clue where to go. At one instance, Nick wondered if he should take the cab back to the airport and fly back home!! Nonetheless, the cabbie made it to his apartment.  There was no lift and Nick had to carry his stuff 3 floors up. His first response after seeing his apartment was of pure disgust. "Come on man- I can't stay here!! The rent to this junkyard is 8 times my house in Perth and is 10 times smaller!!!" he exclaimed. His property management company executive accompanying him gave him a smile and commented that he got a great deal on this one. Nick already drained for the day, gave up on things getting any better. “Yeah, I guess so“, sarcasm flowing through his words. By now, the city had got on his nerves and he was skeptical of his decision to move.
He unpacked his basic necessities, took a shower and settled down on the couch in apartment. Being a complete stranger in town, he wasn't sure how to spend his first Saturday evening. Being too tired by the days’ events, he was reluctant to step out but he had to grab dinner. He googled it up and an online travel website suggested to go to peak to see the laser show over the skyline and grab a good gourmet dinner at the same time. Not finding anything better to do, he printed the map and was on his first expedition in the city. He flagged a cab for an uneventful ride to the peak tram station and then there were hundreds of people queuing for the tram. Nick thought "Gosh !! Queue here too - this city should be renamed QueueLong rather than Hong Kong! ". The online travelogue absolutely recommended taking the Peak Tram to the Peak, so without questioning their judgment, he joined this never ending and extremely slow moving human chain. It was another painful one hour before Nick could board the tram and by then he had completely lost it. He was sweaty, jet lagged, hungry, tired and annoyed. Moreover, the eager and loud Mainlanders were not helping the cause. His emotions were at conflict where at personal side he was bitter and isolated while at his professional side, he wanted to see the famed HK skyline. He was bitter at his company for sending him to this remote place. He had left behind everything- his family, his girlfriend, his comfortable lifestyle to come to a place he couldn’t relate to, a place which had isolated him from things he liked. He wanted to go back to relative comfort of his apartment but the architect in him persevered and ruefully, he walked towards the peak gallery with no expectations at all. 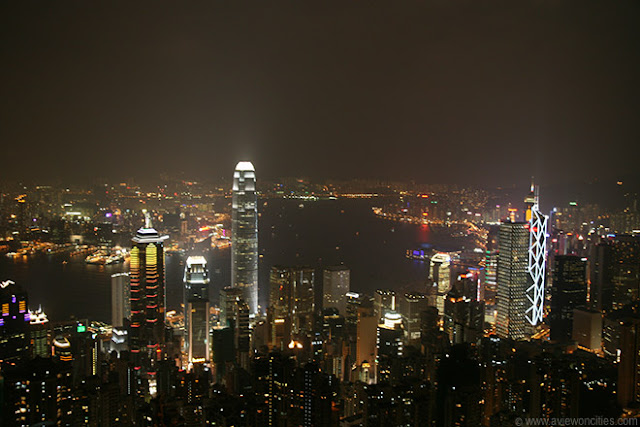 Once he was on the peak gallery with a view of the entire Hong Kong skyline, time stood still. He was flabbergasted by this man-made wonder which was in perfect harmony with the breathtaking natural scenery around it. Nick was on a high – a high which he had never experienced before.  In a flash, neither was he tired, nor was he annoyed or hungry and the continuous chit chat of the tourists now sounded like symphony to him. He was allowing the grandeur of the view to absorb into his system and the process was taking its own sweet time. After a dazzling one hour, Nick stepped down the staircase to have dinner in a city which he felt he could call home.
Posted by instant_blogger at 8:33 PM
Email ThisBlogThis!Share to TwitterShare to FacebookShare to Pinterest