A shadow of humanity amongst the animalism 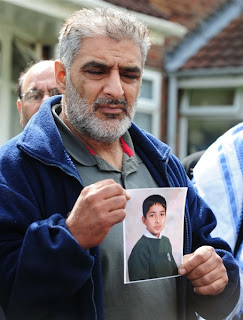 The London riots are the topic of discussion across the world. Everyone relates the riots to the fires, the looting and the violence. However, among this mayhem, emerged a little story about Tariq Jahan which relinquished my faith in humanity.
Tariq Jahan is father to Harooq Jahan, a 21 year old youth who was run over by a car driven by a black man in Birmingham. While the British Pakistani community raged in anger and retribution, Tariq took a stand which very few people could relate to as a father at that moment.
This is what he had to say - "I lost my son. Blacks, Asians, whites - we all live in the same community. Why do we have to kill one another? Why are we doing this? Step forward if you want to lose your sons. Otherwise, calm down and go home - please"
His statement was pacifying act to a definite and bloody confrontation between the Asians and the Carribeans. While the local authorities and politicians were making controversial racial statements further provoking the masses, the father, so dignified in grief and mourning, was instrumental in bringing some calmness and sanity into the Britishers.
Lets be honest about this one - British Pakistanis don't have a great public image in UK. Tariq, single-handedly has laid the roots to a new Pakistani image - an image of calmness and dignity. He has emerged as the God sent Ambassador of peace, someone whose plight may have missed the stone cold conscience of the rioters but must definitely have softened the affected others who were angered and vengeful.

We need to offer our deepest sympathies and empathy for Tariq's loss but more than that we need to respect and admire his courage to let go. Because, sometimes letting go is the most courageous act possible.
Posted by instant_blogger at 12:48 AM
Email ThisBlogThis!Share to TwitterShare to FacebookShare to Pinterest