Inclusive Growth - where do we stand 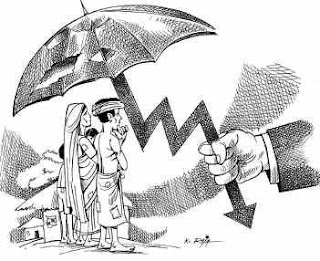 Recently, suicide of Chinese labor hit headlines across the world. It was a painful realization for the world that glory is not in growing your GDP by 10% or becoming the second largest economy in the world. It’s about ensuring that every human being in your country can live like a human being having access to the basic needs such as food, clothing and shelter.
What I am writing about is common sense but again common sense is not that common.
Today's buzz word is inclusive growth. Every political leader or economic strategist uses this term in their speeches and analysis.
What is Inclusive growth?
Inclusive growth as a notion means – creating economic growth in a region or a country where the entire population contributes and benefits from this economic development.
Sounds quite obvious but the harsh reality is that 300 M people in India are still living below poverty line, 116,858 workers in China annually die in work related accidents due to negligence,  infant mortality rate in Brazil is 23 out of 1000 children born, only 7% of 142M Russians have access to business loans.
I am focusing on emerging economies or specifically the BRIC nations. These countries have astonishingly high GINI indexes. While 5 Indians are on Forbes 100 richest list, there are also 300 m poorest people in the world. They are debt ridden, unhealthy and illiterate. We talk about the brilliant economic performance of India in the last 2 decades and conveniently ignore this harsh reality. Noone is alien to China’s labor situation where 30M migrant workers are virtually living in hell on the east coast. Lately, Chinese labor suicides in the Pearl River Delta hit the headlines.
Why is inclusive growth so important? Because it will define how sustainable is this celebrated economic growth is in emerging economies. A society where 5% people are buying Louis Vuitton bags while 20% of population is struggling to acquire a meal a day is sure shot formula for a social disharmonious society. For ex; my chauffer in India makes US $100 a month. He drives us to a fancy restaurant where we spend
a similar amount in one evening. Somewhere in his mind, this thought definitely arises that what he works so hard to earn in a month, is spent by us in a few hours and life is unfair. The warlords in
Brazil, the Maoists in India, Russian rebels are the fruit of this economic disparity. For sustainable economic growth, it’s critical to form a society where everyone meets their basic needs and the struggle for survival is history.
The important question is - how is that possible? I am no expert but the foremost need is to provide quality education to the masses so that everyone can compete on the same leveled field. Again this is a
no brainer but sometimes reinforcing a fact makes it more credible.
Another way is urbanization. This is a controversial and a debatable proposition. After all, the miserable living conditions of migrant workers in urban China strongly advocate against it. But still China intends to urbanize 400M people in next 15 yrs. This will create 3.5 M jobs bringing some prosperity to the worker class of the country.
Providing access to banking to the poor. Almost half the world is unbanked. Yes, that’s staggering 3.5 billion people. Many of them can drastically improve their living standards if they have access to basic loans and saving accounts. Governments have realized this but a more expansive thrust should be applied on providing banking to the poor.
We read about the phenomenal growth potential of the BRIC economies in the last 3 decades. My colleagues and friends from West are inquisitive and excited by this next leap forward for 3 billion people. However, to sustain this growth and bring massive upliftment for the society, focus needs to on providing livelihood opportunities for the common masses. This proverb though an old one is very relevant to end this post.  “Give someone a fish and you feed him for a day; Teach someone to fish and you feed him for a lifetime” -
Posted by instant_blogger at 7:10 PM
Email ThisBlogThis!Share to TwitterShare to FacebookShare to Pinterest

I could foresee part of the same problem here in India as well. Unemployment exists in a largely invisible way. A lot of RCG (recent college grads) are unable find proper work. For anything only IT employs them but then how different is it when compared to some rcg in China working at a Foxconn assembly plant as a laborer?