The price to pay for automation 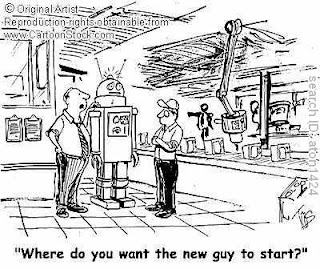 These days how many of us need human interaction to buy goods or services? When was the last time you bought a flight ticket or made a hotel booking through a human travel agent. We very conveniently log onto the web and book our tickets in a jiffy. Are you aware that this paradigm shift has cost 77% of all travel agent jobs globally? If you also visualize automation a major reason for world unemployment issues, then read on.
The modern world has witnessed some tremendous technological leaps in the past few decades. Undoubtedly, these technological advances have made world a better place; it has increased living standards, raised life expectancy and made us more coherent ( atleast theoretically ).  Technology has played a pivotal role in making things more efficient and businesses more streamlined. Eventually, Businesses have got so efficient that human labor is gradually becoming redundant in them.
Technological advances have made life easy. However they have also created an astronomical social, political & economic issue – that of automation and its by-product ie. Unemployment.
The world population grew by 12% from 5.9 Billion to 6.76 Billion between 1999  and 2008. In the same time frame, global economy added 820 million people in the mainstream workforce. This workforce growth meant that the world economically had to grow sufficiently to absorb this new emergent workforce. Global economy doubled from USD 31 Trillion to 61.3 Trillion between 1999 and 2008 but at the same time global labor force only increased by 11% from 2.82 Billion to 3.17 billion. This data indicates that for every 1% increase in workforce, there is roughly 10% increase in GDP. This is only possible if human workforce productivity rises drastically. Economics 101 – one prime basis for rise in productivity is technological advances. So technology helps people do more work in less time and the work is getting more complex to do than ever. This rising trend seems to indicate that the need for semi skilled and low skill labor is dropping. No wonder our global unemployment rate is 8.7% (that’s close to 250 million unemployed people). Thus, technology advancement has made humans redundant in many industries and processes.
Many people argue- what’s wrong with that? You are reducing costs and generating employment for those who build these technologies and processes. Their justification is true but is this truly what the complete picture is.
As per World Bank data, there are close to 1.9 billion semi or low-skilled in the world today. With emergence of robotics and superior machinery, for the same labor, the manufacturing industry produces 8 times more products than what it produced in 1995. This trend of automation of the manufacturing sector is going to get more prominent with time and gradually human interactions in some industries will drop to almost zero. The impact will be staggering. I assume 20-25% of all low and semi-skilled work force will become redundant. They will have a choice to climb up the value chain by learning new skills and enhancing their viability. But how many developing countries workers can afford to learn these new skills when they just can barely meet their daily ends and survive this expensive world.
I discussed this idea with a few economists and they found it absurd that I think like this. After all I am a MBA and I should take a rational view point (rather than an emotional one) and only see numbers and P'&'L statements. To get the rational perspective to this discussion,  Read on ….
These days on the name of efficiency, companies are cutting their employee rolls. What they don’t realize is that – if they all start automating and laying off their employees, who will have the money to buy their goods.
This is the essence behind Henry Ford and Ford Motors early success. When Henry started Ford Motors, he paid his employees double the standard industry rate at those times. He was no fool and clearly knew what he was doing. By creating this surplus cash in his employee hands, he made those employees his first set of customers. According to Ford Motors sales records, in its first 8 years of operation, Ford sold 40% of his cars to his employees and contractors.

So Ford enabled and empowered his employees and converted them into customers. And what are the fortune 500 companies in the US doing today? They are laying off 400K employees. These employees form these companies' core customers and when you lay them off, you are ultimately reducing the buying power of your clients and hence depleting your revenues.


No doubt that technology plays a key part in uplifting basic human lifestyle but the price you pay for this luxury is an appalling story of greed and self-centered perspective. If a key decision holder of a company is reading this – pls stop visualizing your business to be just a stream of numbers. As Charles Handy very eloquently said – “You need to ask yourself a fundamental question – is the purpose of your business only profits? Or is there a grander picture in horizon?
Posted by instant_blogger at 11:48 AM
Email ThisBlogThis!Share to TwitterShare to FacebookShare to Pinterest

good post around a valid concern, but you might have to catch up with the automation i feel :), though i am not much into practice ideally i believe automation is what we have been doing and what which has been giving us employment.

its easy to see automation reduces employment, but on the contrary it provides requirement for more qualified n productive work force who are required to come up with automation services.

i feel all what we do is simply do better, we refuse to do the same job in the same way, automation has been our way since existence!

am i not correct there?

I appreciate the sentiment that emerges from your post – as you advocate a human face of development, which is very relevant in the context of the world’s fight against recession.

However, I see several inconsistencies in your argument, which I thought fit to address in my reply.

•Online booking cost 77% travel agent jobs : But it was also one of the ways for the airlines to reduce costs helping drop in ticket prices, resulting in growth of the industry, enhancing employment opportunities! Just see the way the Indian airlines industry blossomed.
•Human labor getting redundant due to automation : Don’t agree. In fact, businesses have proactively moved to markets where cheap labor is available – like China and India! Cheap labor is as much in demand now as ever!! Contrary to your argument, low cost labor isn’t available in the developed countries despite demand!
•Automation has caused unemployment : Change is inevitable and automation is a form of change. Those unable/unwilling to adapt will be in trouble. Governments play a role here, by ensuring inclusive development. Weaker sections of the society, which are unable to adapt to change, need to have access to opportunities. There is no short cut solution to this. You have a valid point.
•High unemployment rate is due to automation : Unemplyment rate is a function of many variables, one of them being the stage of the business cycle. Boom ensures low unemployment rates. Automation alone cannot deemed as the only reason for unemployment.
•What will happen to the low/semi skilled workforce as automation progresses? : Two options : Either the respective governments play their role or we bring all developmental/automation activity to a halt. The choice is anyone’s guess!
•Businesses are unemotional, and see only numbers in their P&L account : True. But how good are the dud, loss making PSUs to the society? There are plenty of examples of Corporate Social Responsibility (CSR) displayed by groups like the Tatas, Birlas, Modis etc, emulation of which needs to be encouraged.
•Layoffs and automation are linked : Current lay-offs have more to do with the meltdown and recession than automation.
•Employees as customers : Don’t quite agree. Businesses need to think much bigger than this!

Amit, I guess Aman has replied on most of the caveats.

However, in my opinion, stopping automation is not a solution to reduce low skilled unemployment. Rather, there should be incentive based mechanism to upgrade the skills of the people. It will eventually come in place when there would be a shortfall of skilled workers to keep pace with the development activities; like how the literacy ratio has improved over time.