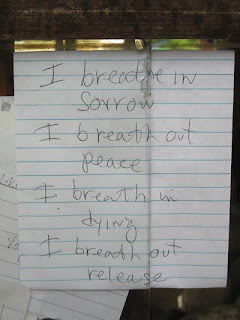 My blogs are generally optimistic in tone and are developed around the central idea of staying and being happy. However, today I am going a bit off-track.
Last month I was backpacking across Cambodia. Now, Cambodia is famous for its mystic and magical Angkor Vat temple campus. Most people visit Cambodia to see Angkor.
Being no different, I originally planned Cambodia to see Angkor. However, while researching about the country, I came to know about Khymer Rouge and its 4 year rule of barbarism and human atrocities. History always fascinated me and unwittingly, I was hooked to the Khymer story which bought me to Phnom Penh.
There are 2 primary cities in Cambodia – Siem Reap which is close to the magnificent Angkor temples and Phnom Penh – the capital of Cambodia. This blog is more about Phnom Penh and specifically 2 spots there – The Genocidal Museum and the Killing Fields (the names have already given you a hint of what is to follow)
The human race is more diverse in its actions than any other race which ever existed. On one hand, we have angels likes Mother Teresa and Florence Nightingale who served mankind till death while on the other hand the same human species has given rise to demons like Pol Pot and Leng Sary of the Khymer Rouge.
Now, what is Khymer Rouge? It was the communist political party which ruled Cambodia between 1975 and 1979. They were backed by the US which grabbed power from Lon Nol - Cambodia’s previous Government. With the anti-American Ho Chi Min in control of Vietnam, the US needed an ally in Indo-China region and Khymer Rouge fitted US’s strategic bill perfectly. What followed was the most horrid and agonizing 4 years of human atrocities world had seen since the holocaust in Europe during World War 2. After coming to power, Pol Pot, the head of Khymer Rouge enforced his economic and social policies on Cambodia. His policy to convert Cambodia from an industrial and knowledge economy into an agrarian economy crippled the country for the next 30 years and which’s impact is still felt. Pot envisaged Cambodia to be a peasant society where rice would the primary economy driver. To ensure no opposition from the academia and industrialists, he went on an offensive where he completely dismantled the education and industrial sector of Cambodia. How he did it, is a nerve wrecking and shocking story which I will try to share as I witnessed it in Phnom Penh. 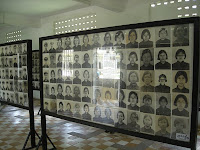 During its rule, Khymer Rouge went on a large scale cultural cleansing act where they directly and indirectly killed over 2.2 million people. You might say- big deal!! China lost over 40 million people in the famine following the “Great Leap forward” while the great influenza of 1919 took close to 30 M lives across Europe. However, one must note that – during the 1970s Cambodia’s population was mere 8 M and 2.2 million dead meant a country losing over quarter its population. 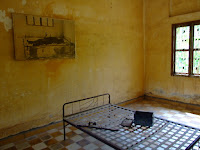 So, I went to these 2 sites in Phnom Penh. I started with the Genocidal Museum which was a higher secondary school converted to a high security prison/interrogation center by Khymer. Over 20000 men, women and children were detained and killed here by Khymer during its 4 years of rule. The Governments following Khymer have done a fantastic job of preserving the place intact for people to get a feeling of the mass scale human manslaughter which happened over there. When I entered the place, I got this eerie sense of bloodiness which words can’t explain fully. I felt this sense of discomfort and doom which one feels in a cemetery. I could smell death and blood all around me. The tour of the facility was an hour of mental torture and anguish for me which brings tantalizing memories even today. I saw torture rooms with torture equipment, torn clothes of the dead prisoners, prison cells and gallows. Every room had a story to tell and they all were shouting those stories out loud. The Khymer were meticulous in recording prisoner data and the museum had rooms where photographs of all the detainees were illustrated. There were thousands of front portraits of men, women and young children glaring at me. I couldn’t believe that these 12 year olds were tortured and ultimately killed here at the same spot I was standing. I was suppose to spend 2 hours at the genocidal museum but after an hour, I couldn’t take it anymore. Speechless and in agonizing pain, I left the place. My tuktuk driver exactly knew what I was undergoing and without mentioning a word took me to the next spot which were the killing fields.
Now, if I thought Genocidal museum was bad enough, ‘killing fields’ took this experience of witnessing human brutality to the next level. The killing fields which were around 45 minutes away from the city were the mass burial site where Khymer killed and buried over 80000 people. 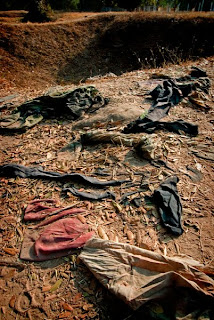 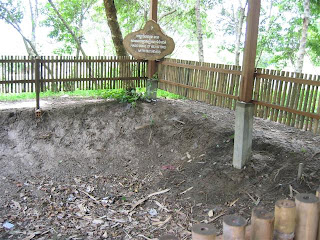 You could see skeletons, skulls and blood stained clothing everywhere. There was death all around me and the silence in the place was deafening. In order to save ammunition, Khymer soldiers carried on executions using hammers, axe handles, spades or sharpened bamboo sticks. Some victims had to dig their own graves.  The soldiers who carried out the executions were mostly young men or women from peasant families.
While walking over the mass graves, I was thinking about Neil Armstrong’s walk on the moon. Armstrong said every step he took on Moon was a giant leap forward for the mankind. Every step I took in the killing fields made me realize how many giant leaps backward we went during this brutal era of Khymer. Killing fields bear witness to such large scale killings which teaches us a lesson that if power goes into the wrong hands, it can bring upon destruction and havoc which can wipe out generations to come. After staying at killing fields for 20 minutes, I couldn’t take it anymore. With a heavy heart and a deep sigh, I bade farewell to Phnom Penh and Cambodia that evening.
I want to leave one message behind for all. I want all of us to bow to our Gods in gratitude for ensuring that we were not born in Cambodia at that time. While we are reading this blog at the comfort of our homes, just remember the pain those good innocent men, women and children went through. Also request you to contemplate whether are we giving back enough to the society? Isn’t it our moral obligation to do so? Obligation is a pretty comforting word here, I would rather call it our duty.
What was appalling to me was that no country raised any voice against what was happening in Cambodia in those 4 years. This reminds me of a quote by Nelson De mille – “If everyone howled at every injustice, every act of barbarism, every act of unkindness, then we would be taking the first step towards a real humanity.”
Posted by instant_blogger at 2:04 AM
Email ThisBlogThis!Share to TwitterShare to FacebookShare to Pinterest

Thanks for writing that Amit. It's something we should all know about. Incidently I have a friend from Cambodia who I met in Coventry. He is studying peace and reconciliation! So something good has come out of the Pol pot regime.

Did not know this history. Very sad indeed.

Apparently, the people who wore glasses and people from cities were considered to be 'educated' and cleansed as well.
The irony is that Pol Pot died a natural death and wasn't even tried for these inhuman crimes.